Here’s a map with all the places I’ve mentioned in this article.

You’ll find this hidden cafe down a little alleyway and up a set of stairs that just looks like a normal apartment building. Inside, you’ll find a very trendy cafe that looks out over the Aristotelous pedestrian arcade. It’s got AMAZING decor – old typewriters, clocks, and random antiques, with beautiful tiled floors and plenty of plants. The wine is cheap and pretty good, and comes with surprise cheese which is always a win.

If you want a truly local drinking experience, where you’ll be hard-pressed to find any other tourists, there’s a random hidden rooftop bar in the middle of the city. From what I could understand, it’s part of an artist’s collective. We went there two nights in a row after a local’s recommendation, and one of them we stumbled into a random concert / rap-battle going on. Go here, and look for a red doorway and walk up four flights of very sketchy-looking stairs to the bar, where you can get wine for a Euro.

From the outside, this just looks like your standard barber shop on a city street. But once you head inside, you’ll find a coffee bar tucked at that back which serves up a surprisingly good brew. It’s strong and a little bitter, and only €1.60 for a freddo espresso. You can get it takeaway or sit at the tables out on the street. By the way, the barber shop itself looked pretty good, with charcoal face masks on offer for the men.

I didn’t think Thessaloniki would give me the best falafel of my life, but here we are. A breezy shop overlooking the Roman agora, Garbanzo has a variety of wraps and salads, and a huge homemade sauce menu that includes things like vegan mayo, hummus, and avocado sauce. The falafel itself is out of this world delicious, soft and flavorful, and not fried like many other places.

Most people probably walk right by Thessaloniki’s “catacombs” without even realising. They’re not actually underground tombs, but a couple of rooms connected by a tunnel, which you can find inside a little church in a sunken green garden in the middle of the city. It’s a great place to escape the heat for a little while.

While this isn’t a tourist attraction, it’s pretty cool to see. During the Greek economic crisis in the ’00s, a lot of people became unemployed or homeless. May were too proud to ask for help or didn’t want to be seen asking for charity. Someone in Thessaloniki started this “wall of kindness”, where anyone can drop things they don’t need – clothes, food, medicine, you name it – an anyone can come pick it up, no questions asked. It’s still going strong over a decade later, and the same idea has been duplicated in cities all over the country. It’s not marked on a map but it’s here.

This shop is a huge tourist magnet but it’s cool to check out if you’re already down walking by the water. It’s a nut shop where you pay by weight, but have literally hundreds of things to choose from. There’s all your standard nuts and seeds, but also have dry fruit, granola, candy, and bars. There’s a huge machine that looks like it’s roasting fresh nuts but when you look closely, they’re actually just wooden balls. Even if you don’t buy anything, it’s worth a peek.

Not only does this church, set up on the hill, have great sweeping views of the city, but there’s something even better inside. There’s a beautiful, giant mosaic on the wall and roof over the altar, which was covered up shortly after its creation when religion had to be hidden. Centuries later, an earthquake dislodged some of the cement covering the mosaic, and they were able to chip it away to reveal what was underneath. It’s in great condition and free to visit.

While you’re up on the hill, stay for a bit and explore the old town. While the flat area of the city has shops and restaurants, people and traffic, the old town is made up of winding cobblestoned streets and a lot of houses. The architecture is really interesting, and many of the houses are painted in bright colours and covered in plants. There’s some great street art so keep your eyes peeled! Also there are a lot of cute cats and dogs running around, if that’s your thing.

Sunset from a boat

There are two cheap ways to do this. If you head down to the water near the White Tower, you’ll find a couple of pirate ships that set sail along the waterfront for thirty-minute stints. It’s free to get on, with the expectation that you’ll by a couple of drinks at the (pricey, but not too bad) bar. If a touristy pirate ship isn’t your cup of tea, there are ferries out to the city’s beach neighbourhoods and back. It’ll warrant a half-day or full-day trip, as the ferries are around 45-minutes each way. Time your return ferry to coincide with the sunset.

Just like many other European cities, Thessaloniki has a market area. Mondiano and Kapari markets are the most traditional ones, with fresh produce like fruit, fish, meat, nuts, olive oil, spices, and basically anything you can dream of. They’re great for wandering around and picking up snacks – the fruit is SO fresh, and I bought some high-quality, really cheap nuts.

While wandering around the city, we happened upon this tiny vintage store that somehow swallowed up twenty minutes of our time. There was so much in there to just look at and touch – from old magazines and coins, to jewellery and photos and lamps and furniture. It’s an awesome place to browse and kill time, and the staff were great for a chat. I can’t find it on Google Maps but it’s around here.

After a night out enjoying Thessaloniki’s cheap and fun nightlife, you’ll want to refuel. Not that many good places are open, but my friend Ashley took me to this souvlaki joint. It’s not the best food in the city, but it’s exactly what you want at the end of a night of drinking. They put chips inside their souvlaki pitas which always gets an A+ by my standards.

Was there somewhere I missed? Let me know your favourite places in Thessaloniki in the comments below. 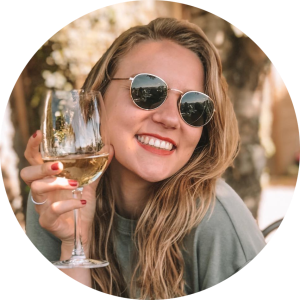 Jemima Skelley is a writer, video maker, and lover of travel, food and wine.